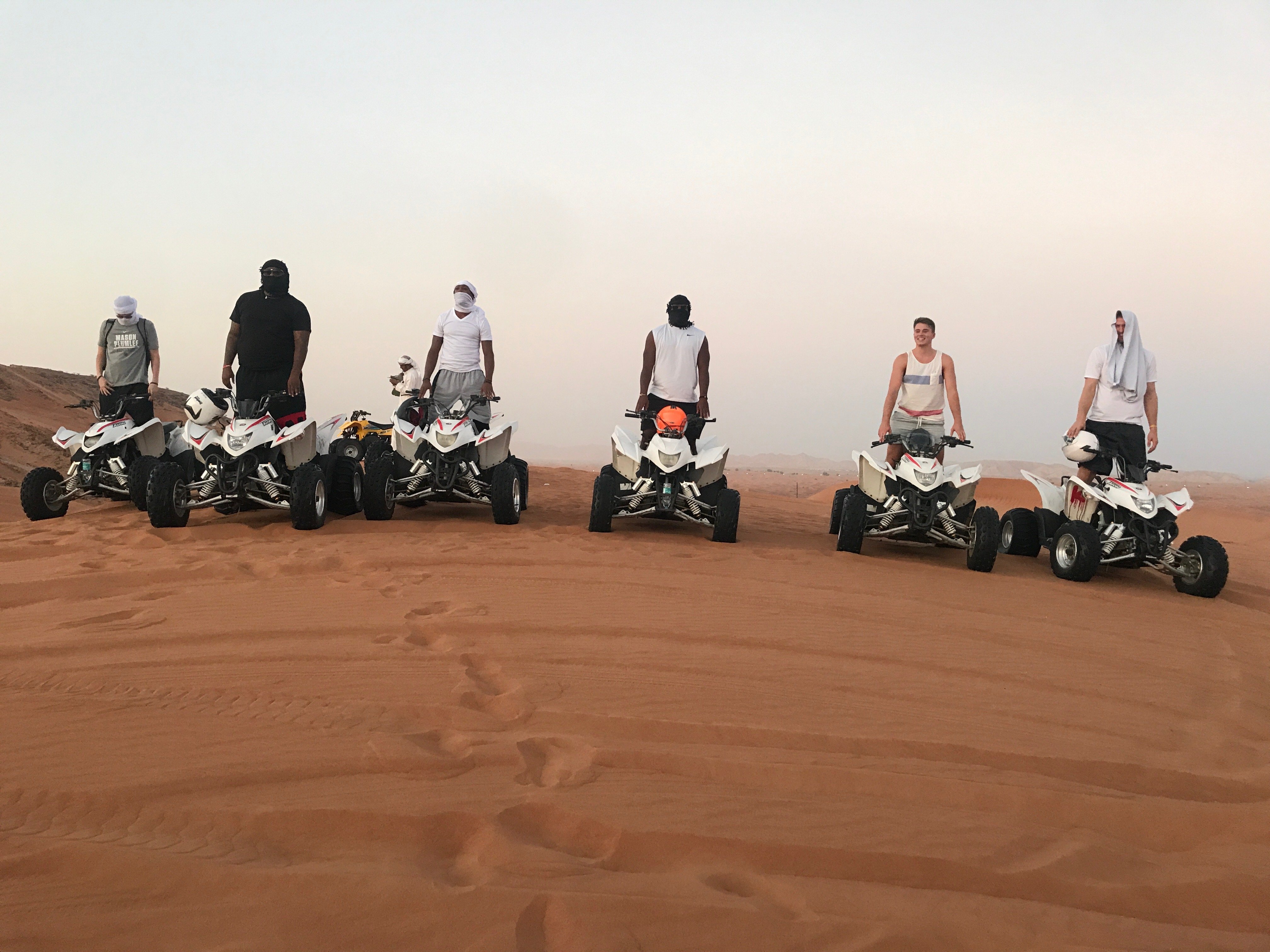 For the past two years, I’ve hosted a basketball camp in Dubai. This has prompted a number of questions from people, like: “Why Dubai?” and “Do they even play basketball in Dubai?”

As I shared on my blog last year, Dubai was a place I wanted to get back to after a brief visit during my junior year at Duke. I had looked into doing a Dubai camp in the past, but finally got it off the ground last summer with the help of a few friends. It turned out to be such a good experience that we decided to do it again this year. I loved year one, but everything about year two was better — the venue, the turnout, the skill level, the dancing…


The kids were amazing and they brought effort and a positive attitude every day. Yes, they do play basketball in Dubai.

Basketball can be such a business sometimes and hosting a camp reminds me of the fun it should always be and the doors the game can open. As a kid, going to camp got me out of my comfort zone. I had a chance to play against better players, work with different coaches and meet new people from all over the place. That’s a given in Dubai, which is one of the most diverse and international cities in the world. This year, our campers came from more than 20 countries. We had coaches from the Philippines, Lebanon, Syria, Lithuania and Russia working side-by-side with US guys from Philly, Evanston, Baltimore, New Hampshire and New York. Hearing some of our counselors’ stories and how they arrived in Dubai shows you that basketball can literally take you anywhere. One of our counselors grew up playing the game in Syria, but couldn’t play for years because of the war. When she finally escaped to Dubai, one of her first stops was a basketball court. Now, she’s a coach and is on the court every day.

It’s amazing to see the growth of basketball in the Middle East. When I was there with Duke in 2011, there were few, if any, places for kids to learn the game. Now there are several basketball academies, better coaches and better competition. On our final day of camp this year, we had a staff game and played an All-Star team from the UAE that had some quality local and international players. It was a much stronger group than the UAE national team that we saw in 2011, which might not have beaten a good US high school team.

Until recently, expats born or living in the Emirates couldn’t join local athletic clubs or play for the UAE. A new rule just lifted this restriction, and that should result in an influx of talent and greater participation in all sports. It will also mean that more Emirati kids will be playing with their expat neighbors. Next year we look forward to bringing everyone — expats and Emiratis — together in the same gym.

The opening of Dubai’s first major sporting venue should also help grow the game. I had a chance to visit and provide some feedback on the new Dubai Arena, which is under construction and scheduled to open next year with an NBA exhibition game. I’m officially lobbying the league to send the Nuggets.

The Dubai Arena will look a lot like the new NBA arenas, but have some unique features like a Royal suite and an outer “skin” of programmable LED lights that will make it stand out in the Dubai skyline. It should be an exciting place to play. 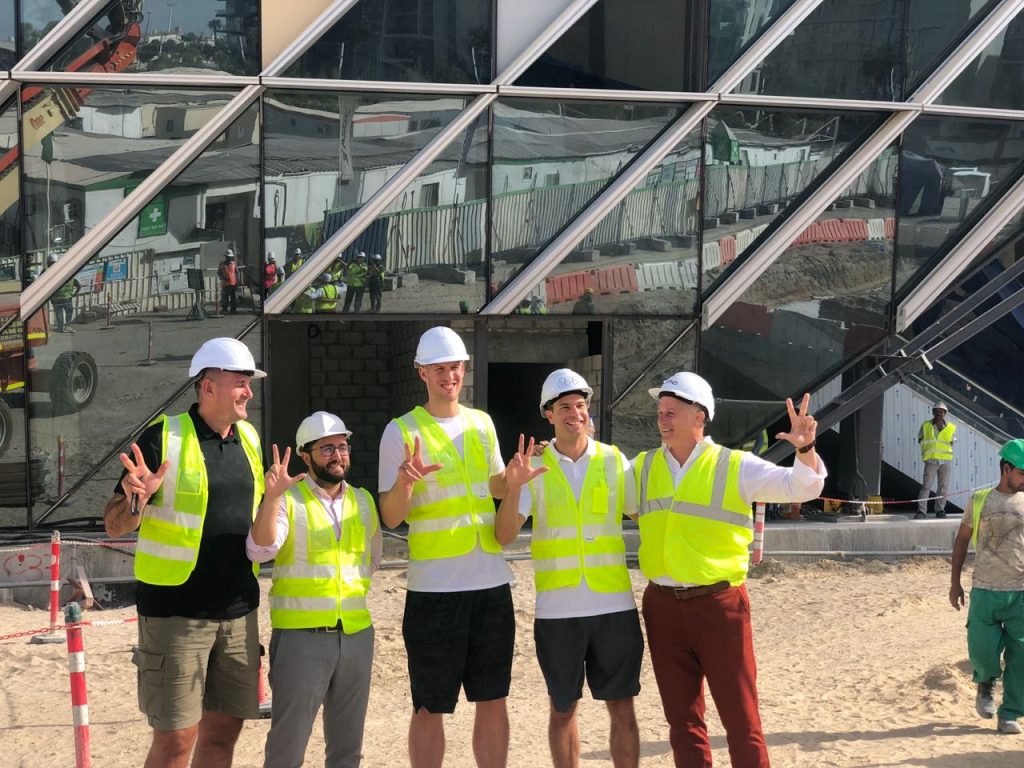 As always, trips like these wouldn’t be possible without a lot of help. Big thanks to Duplays for helping to organize and to Jam Basketball Academy, the Aflec School, Zoran Savic of BasicBall (and the former GM of FC Barcelona) and Ball Above All Sports for making this year’s camp a special one.

Of course, it wasn’t all basketball. We had some great meals, saw some of the sights and did the sand dunes as well. I made it back the Burj Khalifa, this time to visit a friend who lives there. Having a home in the world’s tallest building comes with definite perks and massive security, including multiple checkpoints just to get in the front door.

There’s no Darby in Dubai, but we ended up at 1Oak.

It’s always different visiting a place for the second or third time. There’s less pressure to try to squeeze everything in and everything is more familiar. You’re ready for the little things (like bringing the right power adapter) and more prepared for bigger things, like the heat. (Honestly, 110 degrees didn’t feel so bad this time around). It also becomes easier to see beyond the stereotypes. No, not everyone in Dubai drives a Ferrari or lives in a palace. There’s definitely a wow factor to the malls and skyscrapers, but everyday life isn’t all that different than any other big city. People are grinding, working hard to provide for their families. There’s a hustle and a sense of purpose to Dubai. People are proud to be there and excited to live in a growing, diverse city that’s pushing boundaries.

I look forward to returning again next summer.