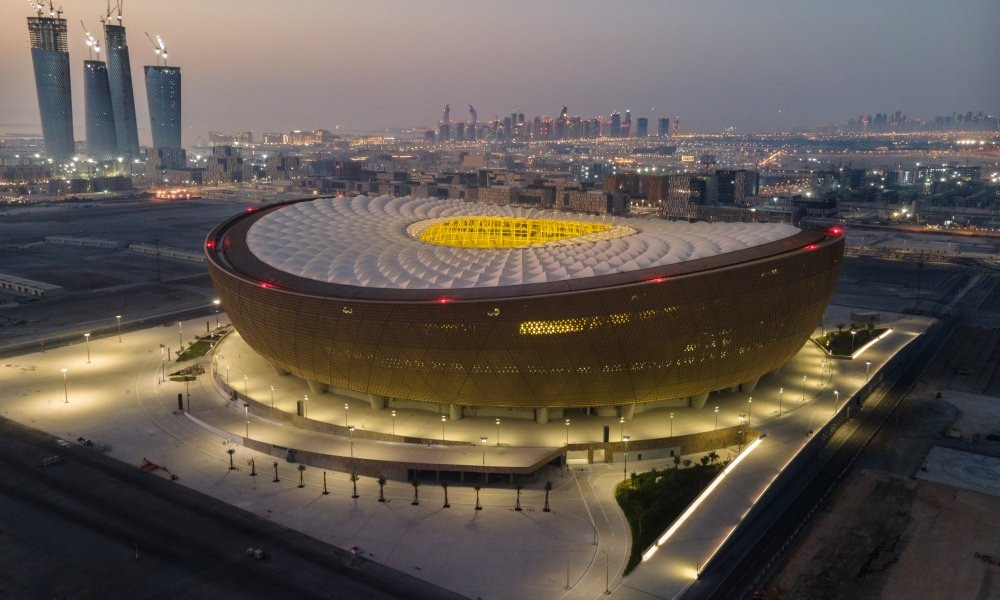 A few months ahead of the 2022 World Cup, I had a chance to visit the host country of Qatar. The World Cup wasn’t the focus of my trip, but signs of the event were everywhere. The whole country was in full preparation mode. I was told that when Qatar bid for the event back in 2010, they were simply hoping to make their case as a contender for future World Cups. When they won the bid, they had to achieve in 12 years what they had planned would take 30. They didn’t have the stadiums and infrastructure and were basically starting from scratch. Safe to say, they accomplished a lot since that time – with lots of help.

There has been some controversy about Qatar’s preparation for the World Cup, and concerns about the government’s treatment of migrant workers. I can only speak from personal experience about my visit, but everyone I met was nice and welcoming and there was a real sense of pride in what’s been accomplished across different segments of the population. I didn’t get a chance to do stadium tours, but the structures are impressive – and more sustainable than you might imagine. One of the stadiums is constructed entirely of shipping containers, and will be disassembled after the event so the containers can be reused. One of the reasons I love traveling so much is to be able to see the world through my own eyes. I think it’s hard to get good information that you can trust – there’s no substitute for first-hand experience.

I was invited to Qatar by Kirk Myers, founder of Dogpound Fitness. Kirk has built one of the most recognized fitness brands by focusing on personal training. He has opened successful locations in New York and LA and has had an eye on international expansion. Kirk is now working on opening the newest Dogpound location in the Msheireb, a massive downtown development in the capital of Doha. He has been there for months getting a lay of the land and invited me to check things out.

What gets me excited – especially because I’ve been able to see them in the Middle East and around the world – are major new urban development projects like Msheireb. I find it amazing that developers can look at a plot of land that’s completely untouched and develop a city from scratch. I’ve seen a lot of PR and news around Neom and “The Line” landscraper project in Saudi Arabia, which recently broke ground. To me Msheireb is that to a smaller degree and incredibly well-executed. You’ll find things that just make sense and accommodate living in today’s cities, like modern technology and infrastructure, smart historical preservation, sustainability, and ease of access to world-class services – like training at Dogpound. I’m excited that Kirk is part of it.

Some of my other stops in Doha included the 3-2-1 Qatar Olympic and Sports Museum – a museum dedicated to the global story of sport. While we have museums in the US that are specific to individual sports, it was interesting to go to a museum that is inclusive of all sports – and see who stands out for global recognition. I was literally halfway around the world looking at tributes to Tom Brady and Michael Jordan – and even took a pic of a ball signed by Coach K. There’s an Olympic component to the museum, so there’s a big collection of Olympic medals. What I appreciated most was how the museum shows how sports have evolved over time. It’s not just about displaying items, but telling the how and the why.

I also had a chance to visit and work out at Aspire Academy, a destination for elite athletes in the region and probably one of the top sports training facilities in the world. I saw things at Aspire I hadn’t seen in the states. Everyone knows soccer is big globally, and Aspire has a soccer focus. But plenty of other sports were represented — there was high-level ping pong training, for example, in a dedicated, state-of-the-art space with dozens of tables. The staff and facilities at the on-site sports medicine hospital, Aspetar, were on par or better than most pro sports organizations. The PT team mentioned that Joel Embiid had been there to rehab his foot at one point.

Mostly, I was in Qatar to support Kirk. He’s built a great brand and big following on social media. His global vision is for Dogpound to be the leading luxury training brand in international, cosmopolitan cities, and expand to places like London and Singapore. I have a similar vision for a steakhouse I’m partnering in developing in Chicago. Kirk has done it his way, without sacrificing his authenticity. Kirk’s pitch deck is unlike any investor deck you’ve ever seen. (If you want to see other cool decks, Business Insider has a library of decks from early stage start-ups that are now successful.)

Though his Doha location won’t open till 2023, Kirk and Dogpound have a presence at the World Cup. Kirk is likely the only guy who could pull off the type of celebrity soccer match roster worthy of a World Cup audience.

I concluded my visit with a stay at Zulal, a coastal wellness retreat developed by the royal family. I’d never been to a wellness retreat before, but I’m hoping to make a habit of it. It’s centered around relaxation and re-charging – truly an escape, with some unique touches like personally-curated meals, and a “house of wisdom” library with a collection of 4000+ books.

One of my favorite stories I learned about Qatar was that of the former emir, Sheikh Hamad, who in the 1990’s initiated the large-scale development of the North Field in the Persian Gulf, the world’s largest liquid natural gas field. Experts told him not to do it, that the country had other more pressing priorities and he’d never recoup the investment in infrastructure through LNG exports (which were in much less demand at the time). He did it anyway and it changed the direction of the country from a small-time oil producer to one of the world’s richest countries.

It might sound crazy for a little country in the desert to host a World Cup or for an American fitness brand to go from NYC and LA to Doha, but that seems to be the spirit of Qatar. Big wins often require big risks and going against the grain. There are plenty of examples of that here and I’m grateful to have seen it first-hand.

Some additional recommendations if you’re headed to Qatar:

The National Museum: With a design inspired by the crystalline patterns of a “desert rose,” it’s worth going just to see the architecture.

Education City: My experience in traveling to Middle Eastern communities like Doha, Abu Dhabi, and Dubai is that the leadership acknowledges they can benefit by learning from others’ successes – and that’s especially true with education. Education City brings top US and regional education institutions together with libraries, start-up incubators, and more on a state-of-the-art, 12 square kilometer campus. Georgetown, Northwestern, Texas A & M and Carnegie Mellon are just a handful of the schools that offer degree-granting programs in Qatar. It’s a brilliant concept and example of smart leadership.

Qatar National Library: This is a massive, impressive, modern space for learning and community events intended to advance the mission of preparing Qataris for the global knowledge economy.

Sazeli: I love Middle Eastern food – it’s unbelievable. We visited Sazeli on a recommendation. It is special, especially if you like meat.