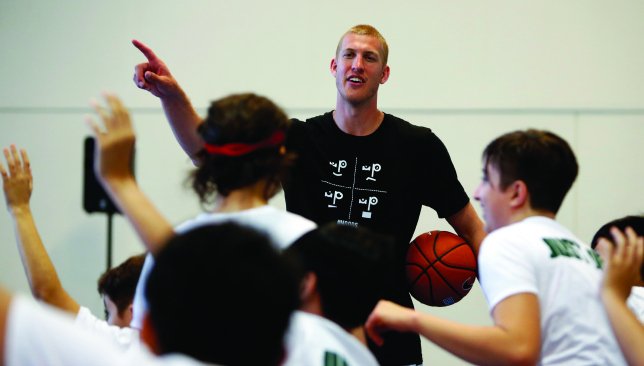 Eight-year-old Maya Bitar had the right idea, figuring out how “to get closer to the net to shoot”, while her friend, Zuhair Abu Aysha, also aged eight, described his favourite part as “learning how to do the shots and passing”.

Abu Aysha typically participates in taekwondo and swimming, but after spending four hours on the court with an NBA player, he says he’ll now play more basketball.

That’s Plumlee’s ambition at the end of the day – a greater love and appreciation for the game. That’s also something the NBA wants, with the league potentially bring an exhibition game to Dubai in two to three years, according to Ben Morel, senior vice president and managing director of Europe, Middle East and Africa (MENA).

“I think it would be great for the area and great for the game,” Plumlee says of the prospect. “If you can see the premium product, which is the NBA – it’s the best league in the world – if it has the chance to come here I think fans would turn out and I think we’d get a lot of good feedback from the people here if they’re able to see the game.”

That’s something to think about for another day, as is a new contract for Plumlee.

For now, a giant among children is happy to share his own passion, with the hope it’s contagious.