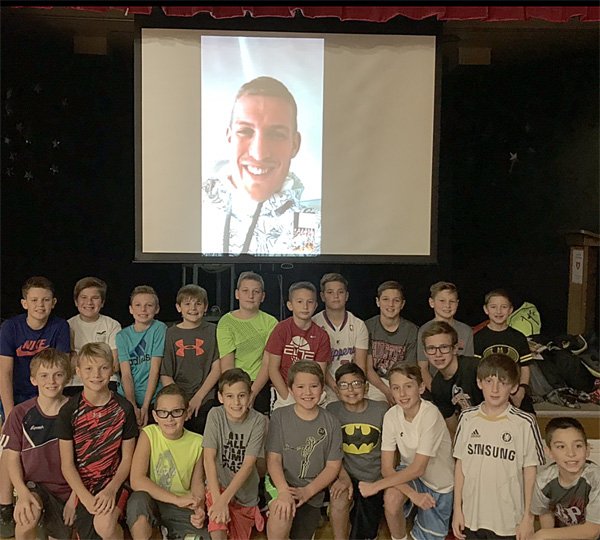 Plumlee, who played for Duke University and was a member of the Blue Devils’ 2010 national championship in Indianapolis, spoke on what it takes to be a champion on and off the floor.

“I’ve been able to win championships at different levels. But the formula is the same,” Plumlee said to the students. “It takes many pieces to the puzzle, everyone has a role, and in order to win, each team member has to perform their role. Scorers need to score. Rebounders need to rebound.

“So many factors go in to winning a championship, that’s why it’s important to never take opportunities like this for granted. The elementary city tournament is like the NCAA tourney in that any given team can win on any given night. In the NBA, we play a seven-game series so the best team always wins. But at your level, anything can happen. That’s why you always respect the opponent right in front of you, because once you start looking too far ahead, you can’t see what’s right in front of you. And that’s how good teams can get beat.”

Questions were posed by Sacred Heart coach Colin Clemens, who was a teammate of Plumlee’s at Warsaw Community High School before Plumlee transferred out of state. Clemens asked Plumlee about what champions do when they’re not playing.

“You’re not truly champions unless you do it the right way. Respecting teachers, coaches, parents, and your members of the community is of the utmost importance. I once had a teammate that broke team rules and he was suspended for five games, and it really hurt our team. Most don’t think of the consequences of their actions until they’re already in trouble.